Posted on January 31, 2014 by journojohnson
Our church has re-launched with a new name! Yes, it’s not every day you hear of a church re-launching but ours has done just that.

For years we were called Glenfall Church or Glenfall Fellowship after the school where we originally met. But since September we have been in a new school premises across the other side of town and now having made friends with all the churches in the area it’s time to announce our arrival to the world. Not only have we got the new name now of Cheltenham Network Church but we are new type of Anglican church too that is allowed to cross parish/area boundaries and meet the people where they are by building up small networks or groups that anyone can join e.g. a book club group, a fitness group, a volunteers group or some groups for the more spiritually minded like a prayer group. We can incorporate all sorts.

This might all sound quite sensible or logical but to the Church of England it’s a big thing. It’s also a big thing to the media who know how the church struggles to re-invent itself. After sending a press release to the local radio station, BBC Radio Gloucestershire and then to the local paper, Gloucestershire Echo, suddenly we have a radio interview on the day, last Sunday (26 Jan) and not only a press photographer but also a journalist turning up for the relaunch.http://www.bbc.co.uk/programmes/p01ph3r3 1:37 (Please note this is time sensitive) 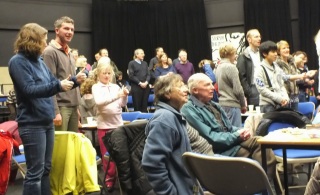 Now I am to write a new story for the Church Times, which is a national publication. Lots of publicity for the church which is great. There is a part of me which feels I should get a mention too both on the radio and in the paper for supplying the press release and the information in the first place but I know that’s just the self talking and the most important thing is to use our writing to give God the recognition. At least that’s what’s important to me, so thank you, God.

I qualified as a journalist in 2002 and after a period working as a freelance for Gloucester Media writing advertorials, interviews, articles and press releases I have gone on to write for lots of magazines and newspapers, both local and national. I write regularly for CPO's Inspire magazine but have also written for the New Writer, Classic Ford, Woman Alive and Take a Break's My Favourite Recipes among many others. I have just published my first work of fiction, a romantic novella based around an Alpha Course with Amazon. It can be found at http://amzn.to/1TdHiDx
View all posts by journojohnson →
This entry was posted in Uncategorized and tagged The re-launch of our church.. Bookmark the permalink.