Posted on September 17, 2013 by journojohnson 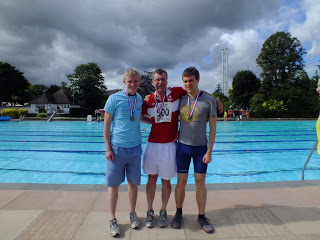 This picture is of my husband, Angus and two sons, Adam and Luke having just completed our local Triathlon.

The dictionary’s definition of Triathlon is an athletic occasion where three different events are represented. This got me thinking about writing. Often as writers we are asked to diversify our skills. That is to say, not just to be a novelist but  perhaps a short story fiction writer as well – Thomas Hardy fits this bill and many others. Or not just a fiction writer but also a poet – Hardy again or W.M Thackeray (Vanity Fair). Writers of novels have often followed careers as journalists first – note in modern times, Wendy Holden or Charles Dickens in the nineteenth century. Shakespeare was a poet too (sonnets) as well as a dramatist as was Oscar Wilde. Sometimes it’s a case of more irons in the fire being more lucrative financially but it’s often a challenge to change from one style of writing to another. After training as a journalist and being advised to use plain language and that sparingly it’s been quite a challenge to try and write poetry since, which often likes the use of flowery, descriptive language, or novel writing where a short piece that says it all succinctly can be an impediment to writing a 100,000 word novel!

But the athlete has to manage all three disciplines too. In this example of our local Triathlon, the disciplines are swimming, cycling and running. Many athletes can’t excel at all three disciplines but in order to compete they have to have a go. Most writers (with a few exceptions) won’t excel at everything e.g. we can’t all be good poets, novelists, journalists and dramatists but that shouldn’t stop us from having a go at most of the disciplines. We might even discover a hidden talent in the enterprise. Triathlon, might also be interpreted as the ‘try’ athlon. In other words, give it a go.

I qualified as a journalist in 2002 and after a period working as a freelance for Gloucester Media writing advertorials, interviews, articles and press releases I have gone on to write for lots of magazines and newspapers, both local and national. I write regularly for the Writers and Readers magazine but have also written for CPO's Inspire, the New Writer, Classic Ford, and Take a Break's My Favourite Recipes among many others. I published my first full-length historical novel. Waireka in 2018 and my romantic novella, Alpha Male in 2016. Both can be found on Amazon. Please follow the links on my book page.
View all posts by journojohnson →
This entry was posted in Uncategorized and tagged Give it a go.. Bookmark the permalink.