Poetry and the Coleridge factor

Posted on April 6, 2016 by journojohnson 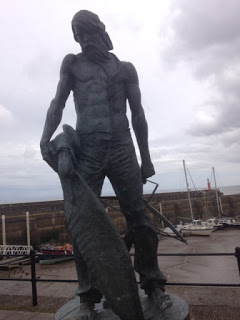 I was really inspired by this statue of the Ancient Mariner at Watchet. Coleridge is one of my favourite poets and this poem, ‘The Rime of the Ancient Mariner’ depicted by this statue with the Albatross he shot, is my very favourite poem. Many have called it a Gothic poem or a psychoanalytical poem, but to me, it is one of the closest depictions of sin and being cut off from God that exists in literature. Like sin, the dead body of the Albatross hangs on him like a weight that is both physical, mental and spiritual. Incredible poem.

Very privileged too to visit a small museum nearby and meet with a modern published poet, a Frederick Bacon, who encouraged me by recognising in me a fellow poet and observer. Then on a few miles to Coleridge’s cottage in Nether Stowey. Here you can touch practically everything (except the few display cabinets) open all the draws and even sit on the chair beside the fire and the cot where Coleridge would have sat. So homely, staff so friendly and welcoming.

Last night too, I had the privilege of visiting the local poetry society meeting again after over a year away www.cheltenhampoetrysoc.blogspot.com An inspiring meeting led by Roger Turner, poems created around the theme of supermarkets. We also each took a poem we had written earlier for critique. My poems were fairly well received along with some helpful comments for improvement. Great to feel acknowledged as a poet when the fictional writing and sourcing book covers has been so difficult lately. Poetry, I think, often comes easier to me than fiction as does article writing.