On the trail of the Durrells of Corfu

Posted on October 8, 2019 by journojohnson
Visiting the island of Corfu would not be complete without following the trail of the famous writing family, the Durrells and we visited at an opportune moment with the TV series about them having just ended in the summer. Although the Durrell family lived in three different houses, the house used in the TV series wasn’t actually one of those and is occupied by a local resident. But on a boat trip around the island we were fortunate enough to be taken to view the TV house which still had the TV lighting sets behind it. 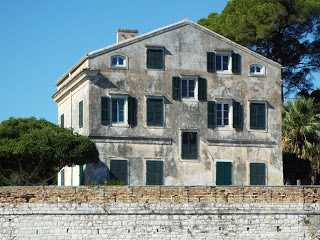 However, I’m afraid they can’t be viewed in this picture!
While in Corfu we read the books about the family. We began with reading Gerald Durrell’s popular book, ‘My family and other animals’, the first part of his Corfu trilogy, ‘Birds, Beasts and Relatives’ and ‘The Garden of the Gods’ following. He also went on to write, ‘A Zoo in my luggage’ and ‘The Whispering Land’. However, Gerald Durrell is better known as a zoologist and naturalist rather than a writer. It was in fact, Gerry’s older brother, Larry who was the main writer of the family with his Alexandria Quartet which won him recognition in his lifetime with the James Tait Black prize and the Booker prize. His book specifically written about life on Corfu is called ‘Prospero’s Cell’. I’m afraid we didn’t get round to reading this book and many find its style very difficult nowadays. Gerald Durrell’s book is well worth a read however,  for its beautiful passages of description of the island.

In order to learn the details of the real family, I warmly recommend Michael Haag’s book, ‘The Durrells of Corfu’. He was a friend of the family and from his book we learn that Gerry’s brother, Larry was actually married to Nancy when the family arrieved on the island and they lived together at the White House, rather than living with the family as the TV series and Gerry’s book suggest. Perhaps he had a writing room in the family home. It is at the White House however,  where the photos and memorabilia of the Durrell family are collected and visitors can view the house on a few days every week. However, it is still hired as a holiday let and there is only really one room where the Durrell collection is kept.

But what a magnificent view! This is me on the balcony on a wonderfully hot day. It must have been very inspiring for Lawrence living and writing here. 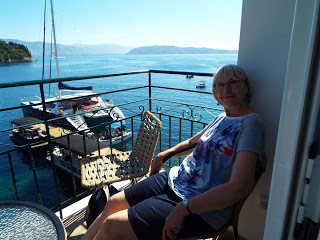 I would like to leave the description of Corfu to the words of Lawrence in his book, Prospero’s Cell.

“this brilliant little speck of an island …with waters like the heartbeat of the world itself”.